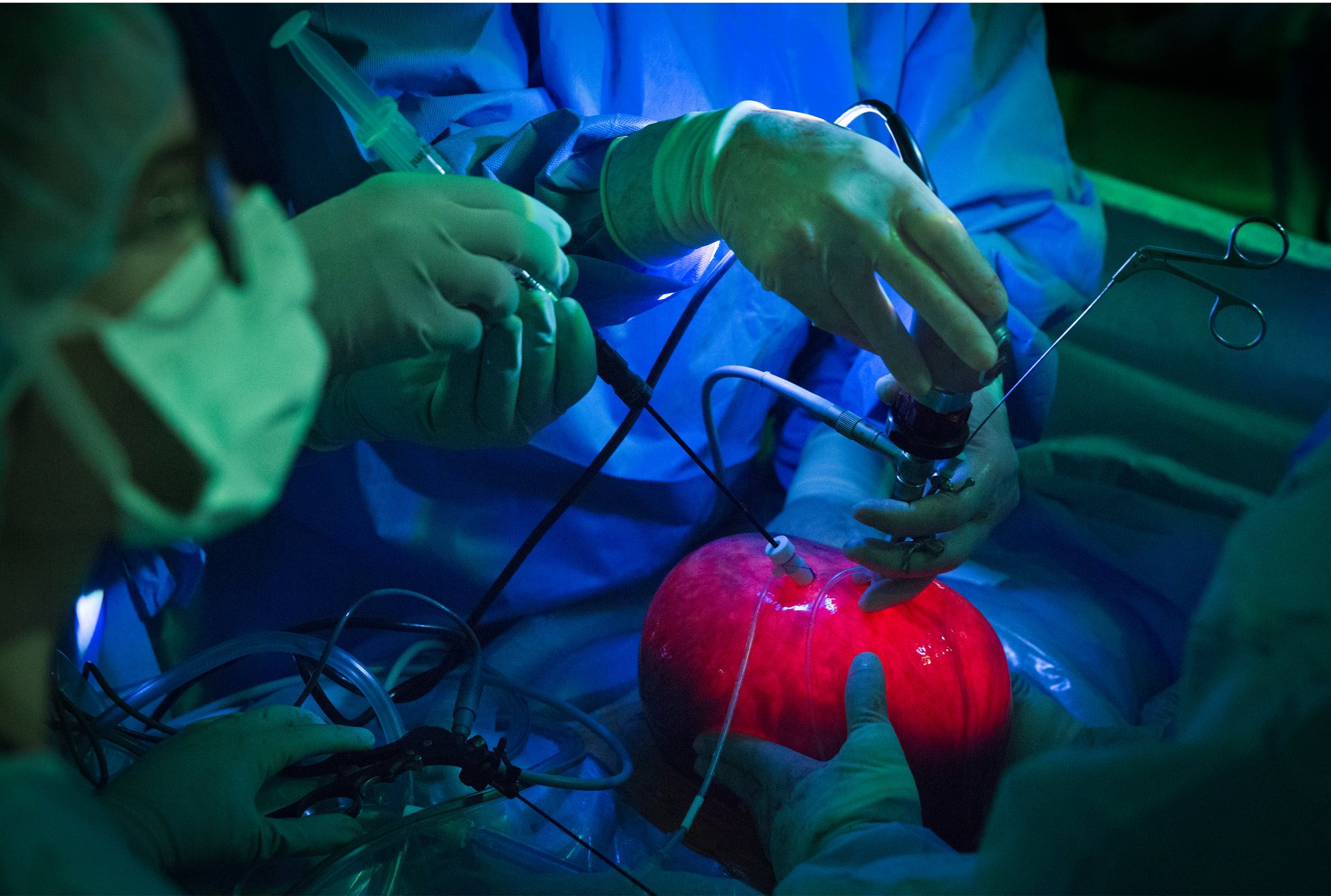 HOUSTON — The patient, still inside his mother’s womb, came into focus on flat screens in a darkened operating room. Fingers, toes, the soles of his feet — all exquisite, all perfectly formed.

But not so his lower back. Smooth skin gave way to an opening that should not have been there, a bare oval exposing a white rim of bone and the nerves of the spinal cord.

“All right, it’s the real deal,” said Dr. Michael A. Belfort, the chairman of obstetrics and gynecology at Baylor College of Medicine and obstetrician and gynecologist-in-chief of Texas Children’s Hospital.

The fetus, 24 weeks and two days old, less than two pounds, was about to have surgery. He had a severe form of spina bifida, in which the backbone and spinal cord do not develop properly. Children born with this condition usually cannot walk, and suffer from fluid buildup in the brain, lack of bladder control and other complications.

A pediatric neurosurgeon, Dr. William Whitehead, joined Dr. Belfort at the operating table. Doctors have been performing fetal surgery to repair spina bifida since the 1990s; it is not a cure, but can lessen the degree of disability.

But now Dr. Belfort and Dr. Whitehead are testing a new, experimental technique — one that some in the field are eager to learn, but that others regard warily, questioning its long-term safety for the fetus.

The surgeons had made a wide incision in the mother’s lower abdomen, gently lifted out her uterus — still attached internally — and made two tiny, 4-millimeter slits. In one, they inserted a “fetoscope,” a small telescope fitted with a camera, light and grasping tool. The second slit was for other miniature instruments.

Lit from within, the uterus glowed, red and magical in the darkened room.

Spina bifida occurs early, at three to four weeks of pregnancy, when the tissue forming the spinal column should fold into a tube but does not close properly. There are 1,500 to 2,000 cases a year in the United States.

The causes are not fully understood, but in some cases a deficiency in the B-vitamin folic acid plays a role, which is why supplements are recommended for pregnant women and the vitamin is added to grain and cereal products.

Introducing prenatal surgery for spina bifida was a bold step. In the early days, doctors were so worried about risk that they operated only for conditions that would be fatal if left unrepaired; if the surgery did harm, it would be to a fetus that would have died anyway.

Spina bifida is generally not fatal, so the standard practice was to operate after birth. But the results of postnatal surgery were mixed: most children could not walk and had other problems.

Doctors began to suspect that outcomes might be better if they could fix the defect before birth. Some of the spinal damage is caused by amniotic fluid, which turns increasingly toxic to the exposed nerve tissue as the pregnancy progresses and the fetus passes more and more wastes into the fluid.

Surgeons thought that if the opening could be closed before birth, sealing out the fluid, some of the nerve damage might be averted. They began operating in the 1990s, but it was not clear the surgery was helping.

A landmark study published in 2011 found that — for carefully selected fetuses — prenatal surgery was better than operating after birth. The percentage of children who could walk independently rose to 40 percent from 20 percent, and the need for a shunt was cut in half, to 40 percent from 82 percent.

“The percent who benefit, I wish it was higher,” Dr. Whitehead said, adding that so far prenatal surgery does not seem to help with bladder incontinence, and most children with spina bifida need catheters to pass urine.

The ideal time for the surgery is from 24 to 26 weeks of pregnancy, Dr. Belfort said — early enough to prevent some nerve damage, but late enough so that the baby has a decent chance of surviving and doing well if something goes wrong and it has to be delivered.

His patient, Lexi Royer, 28, and her husband, Joshuwa, 29, were high-school sweethearts who had always wanted children. But Mrs. Royer had health problems that doctors said made pregnancy unlikely. She had one miscarriage and then did not conceive again.

So the couple were thrilled in May to discover that she was pregnant. During an ultrasound exam at 13 weeks, they saw their son for the first time.

“There were a lot of happy tears,” Mrs. Royer said. “Then the ultrasound tech said she had to go back and get the doctor.”

A wrenching series of tests and visits to specialists followed. With each one, the news got worse. The defect was big and severe, and the brain stem was being pulled down into the spinal column.

“It sounded like we were looking at brain damage, feeding tubes, a breathing tube, a wheelchair, just a bad quality of life,” Mrs. Royer said.

Termination was offered as an option, and Mrs. Royer felt that doctors were pushing it. But this might be their only chance to have a child.

They wanted to learn more about their son’s condition. Mrs. Royer, a hairdresser, and her husband, a firefighter and emergency medical technician, turned to the internet and discovered Facebook groups for parents of children with spina bifida. Some reported good results from a procedure that doctors in their home city, San Diego, had never even heard of: fetoscopic surgery.

In early September, they went to Houston for two days of testing. The results confirmed that their son had a severe spinal defect, but still gave them hope.

“He was kicking his legs, moving all the way down to his feet,” Mrs. Royer said. “He has function down to what they call the ‘gas pedal’ movement. His ankle is flexing and pointing, a really good sign for being able to walk.”

Even if he could not walk, she said, needing a wheelchair does not ruin a person’s quality of life.

More important, the doctors thought surgery had a good chance of eliminating the need for a lifelong implanted shunt to drain excess fluid from his brain. The devices often need replacing, which requires more surgery, and they can lead to infection.

Mrs. Royer acknowledged there was no guarantee that her son would be free of a shunt. But she said she and her husband had “happiness and peace” after deciding to go for the surgery.

On Sept. 26, the day before the operation, Mr. and Mrs. Royer and her parents met with the medical team at Texas Children’s.

With more than a dozen doctors and nurses in the conference room, it was standing room only. All would be involved in the operation.

Dr. Belfort reviewed the test results, telling the group that the fetus had a “significant lesion” involving much of his lower back. But he added, “He’s able to do the gas pedal. That’s a great thing. There’s a lot of function to save.”

Addressing Mrs. Royer, he said: “This is experimental surgery, with no guarantee. You are the person who will take the risk for another person. There is no mandate for you to do this. Nobody will think less of you if change your mind, and you can change your mind until the last minute, until you go to sleep.”

Early the next morning, with Mrs. Royer under general anesthesia, the surgery began in an overheated operating room ideal for the fetus but sweltering for doctors and nurses in caps, gloves and surgical gowns.

During the standard prenatal surgery for spina bifida, surgeons cut open the woman’s abdomen and uterus to reach the fetus. But the newer, experimental approach is different.

Dr. Belfort opened Mrs. Royer’s lower abdomen, but not her uterus. Instead, he eased the uterus out of her body and inserted the fetoscope, and then, through another slit, surgical tools. The doctors drained out the amniotic fluid and pumped in carbon dioxide to keep the uterus expanded, giving them room to work and allowing them to see better and cauterize when needed.

They gave the fetus an anesthetic injection and then, guided by images on the video screens, began to operate on him, tugging skin and membranes over the naked spinal cord and sewing them tightly shut with five stitches to seal out amniotic fluid.

Because the defect was so large, they made “relaxing incisions” along his sides, to loosen the skin so they could pull it across his back. The cuts would heal, though they would leave scars.

Every few minutes, a pediatric cardiologist called out the fetal heart rate, which held steady at a normal rate of about 150 beats a minute. When the surgery was finished, the doctors replaced the amniotic fluid with saline.

The surgery took three hours. The standard, open operation is faster and easier, but Dr. Belfort and Dr. Whitehead think their method will prove safer for both the mother and the fetus.

With the open procedure, the cut into the uterus increases the risk of early labor and premature birth, which puts the fetus at risk for a host of complications.

The incision also raises the risk of uterine rupture during labor, and requires that the mother give birth by cesarean section, which is generally riskier for women than a vaginal birth.

The scarring on the uterus from the two operations makes it likely that she will need cesareans for future births, and also increases the risk of placental problems that can be life-threatening. The small slits for the fetoscopes are thought to reduce these risks.

To develop their fetoscopic procedure, Dr. Belfort and Dr. Whitehead operated on sheep and spent several hundred hours over the course of two years practicing on a simulator that they had created. It consisted of a rubber kickball, about the size of a basketball — like a uterus at 24 weeks of pregnancy — with a doll inside, wrapped in chicken skin that they cut to mimic the defect in spina bifida.

They would insert fetoscopes into the ball and, eyes on the monitor, work together to sew up the chicken skin. They completed more than 30 simulated operations, including two sessions in an operating room, with a full surgical team assembled. They still use the simulator at least twice a month to keep up their skills, Dr. Belfort said.

No fetuses have died, few have needed shunts, and some of the mothers have been able to have vaginal deliveries. Their pregnancies appear to last longer, coming closer to full-term than with the open procedure. More research is needed, but other medical centers have begun adopting the technique. Surgeons at Johns Hopkins have used it to treat five patients, and Dr. Belfort is helping to train colleagues at Stanford.

Doctors who practice the open procedure are critical, and warn that the carbon dioxide pumped into the uterus may harm the fetus and cause neurological problems. Dr. Belfort said there has been no evidence of harm. But time will tell.

Mrs. Royer, who will stay in an apartment in Houston for the rest of her pregnancy, had a painful recovery from the surgery. But she has no regrets.

“It’s not done by any means, but I definitely feel it’s the right thing for us,” she said. “Seeing the ultrasound and how good he’s doing, moving his ankles and feet, it’s such a happy moment.

“I can’t imagine going on further in the pregnancy not knowing every day what damage is being done and if he’s getting worse. It’s such a relief to move forward.”